Governments and organizations from various countries presented certificates of appreciation and citations
to ASEZ WAO for our sincere volunteer services. 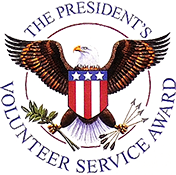 The U.S. President’s Volunteer Service Award is the most prestigious award that can be presented to an individual or an organization that conducted volunteer services for the neighbors and society. ASEZ WAO received Gold Award and Bronze Award for making a big contribution to developing the nation and communities through various volunteer services.

王世明, Chairman of the Board, City of Taichung Xitun District Association for the Advancement of Young Ahn Community, Taiwan